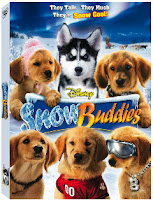 Snow Buddies is a good movie from Walt Disney featuring a slew of voices that we all should recognize such as: Kris Kristofferson, Whoopi Goldberg, James Belushi, and many others.

The first part of the film shows the buddies gathering together. In the game, Hide & Seek, BudderBall sees an ice cream delivery truck and goes directly to it. The others follow him and get trapped inside. Thus, they end up in Ferntiuktuk, Alaska. The viewer is then carried to a scene where mom, dad and son, a family who lives in Fernitiuktuk, are parting for the day going their separate ways. Before they part we learn the son really wants to race dogs, but the father refuses because of having lost all his dogs in thin ice in the middle of a race some time ago. The boy owns Shasta, who looks like a Husky, but may be an Alaskan Malamute, is what we non-Alaskans call a dogsled dog. Shasta is also a puppy and the buddies are scared of him when he first arrives on the scene. Through Shasta, a proposition to race comes up, and after much discussion, the puppies grab the opportunity to train and race because the finish line is near the airport. A chance to get back home where they belong.

This is a good movie that both adults and children will enjoy. It is delightful listening to dogs talk and watching their antics in the snow. The puppies suffer as a child might with loneliness and sadness. Many obstacles stand in their way of going home and are filled with dangers. Yet, there were many good experiences as well. The movie is worth watching.

What works? The dogs are well trained. To help recognize which puppy was which, occasionally they sat in a circle with a special toy in front of them. Each puppy is wearing something that will help the viewer keep their IDs separate, but the importance of keeping them separate is The two adult golden Labs actually showed sadness and worry when their offspring disappeared. Makes me want to run out and get me a golden Lab puppy and a Husky pup. [Smile]

What doesn’t work? I can’t think of a single thing I would change about the movie. Well plotted, including many human activities to fill out the environment, and enough obstacles put in the way as to make the puppies’ struggles to get out of Alaska’s snow bound territory realistic and
dangerous.

As a lover of Walt Disney’s cartoons and movies for fifty years, I enjoyed this one as well.

Check out this website for more information:
http://www.imdb.com/title/tt1079448/ and to see the pictures of the actors/actresses who play the parts. lost in the telling of the story.