Welcome to our #SaturdaySpotlight Q&A interview series at Alternative-Read.com. Every Saturday our resident interviewer, Elise Cooper, gets to discuss another great author's work!

Freefall by Adam Hamdy is the second book of a three-book series.  The Pendulum has

swung to this novel where all the main characters are trying to survive. FBI Agent Christine Ash is still trying to prove her conspiracy theory, English DI Patrick Bailey is trying to recover, and war photographer John Wallace is attempting to escape his past. Although readers can probably figure out what is happening it is better to read book one, Pendulum.

The novel starts out with the horrific scene of a London journalist, a mother having hung herself.  The death triggers an investigation that brings back together Ash, Wallace, and Bailey, hurling them into the path of an unknown enemy. They have one rule, “Trust no one.” Each have encountered these masked men that target them for the kill. It becomes obvious that all three characters suffer physical and emotional pain as they find themselves in mortal danger. Suicide, attempted beheadings and IED explosions, are all described in graphic detail. The investigation leads them to discover that the Pendulum killer was not working alone. As with the first book, the theme has Hamdy examining the internet and its excesses.

Tragedy, conspiracies, and deadly encounters powers this adventure and action story.  It is a pulse-racing read that is relentless and is not for the squeamish.  Readers will empathize with the three heroes, hoping beyond hope that they come out of the danger with an emotional and physical strength.

Elise Cooper:  Is this a warning about the Internet?

Adam Hamdy:  It is fascinating to me how we could be victims of crimes without realizing it.  I really wanted to explore this subject so I spoke with a lot of people on how the Internet impacted their lives.

EC:  It is a three-book series?

AH:  The first book, Pendulum, looks at the consequences of how one person can do someone else wrong.  It deals with anger and fear.  This book, Freefall, expands upon Pendulum and explores how technology can subvert government and financial institutions.  It looks on how each character can trust each other and the government.  The third book, Aftershock, looks at our belief system and how technology has changed the way others can manipulate our beliefs, creating an illusion of facts.  I call it Fake News on steroids.

EC:  Can you explain the book quote, “Concealing our identity only protects those with something to hide?”

AH:  I think technology is only in its infinite stage, and will end up rivaling the Industrial Revolution. No one asks questions about what we want out of it. There are a number of parents who are upset that their children are addicted to social media.  There is this perception that we are not living our lives for ourselves, but for an audience.  Those on social media who are anonymous are far more rude and aggressive.  I am pretty sure if they are in front of the person they are goading they would not behave in that way.  It gives people license to go further than they normally would.

AH:  Suicide is a delicate subject. Technology has opened up people’s access to information.  There are positives, such as suicide support, anti-depression groups, and counseling services.  But there are also negatives: on-line suicide cheerleaders, and chat rooms encouraging people to film themselves as they take their own lives. What studies have found across the Western world is that the more people are aware of suicide the more they make the choice to end their lives.

EC:  How would you describe Ash?

AH:  She is a damaged individual who had a difficult childhood.  She became an FBI Agent to honor her murdered mother.  Outside she has a tough shell, but inside is very fragile and vulnerable.  Overall, she is tenacious, smart, paranoid, and wants to isolate herself.

EC:  How would you describe Wallace?

AH:  He embodies the average person.  He is on a journey of redemption and forgiveness.

EC:  How would you describe Bailey?

AH:  I think he is the only blameless character of the trilogy.  He is a good guy who tries to do the right thing.  He is compromised by childhood friends like Salamander, which is based on my childhood friends.  They came from the wrong side of the tracks who live their own moral code.  Overall, he is smart, tough, dogged, and someone who keeps getting punched but gets back up.  I have him suffering from PTSD because police, law enforcement, and soldiers that go through life changing events quite often have serious repercussions and emotional scars.

EC:  How would you describe the main antagonist, Smokie?

AH:  He is a psychopath.  I met with some murderers who consider themselves the heroes of their own stories.  Smokie thinks that everything he does is justified, including all the pain and suffering he inflicts.  He is very angry and believes that the end justifies the means.  He has no morality.

EC:  Interesting your filler characters have no names but are referred to as “scarred man,” “fatman,” and “bomber-jacket.” Why?

AH:  I write from a character’s perspective. What they don’t know is what I, the author, as well as the reader, doesn’t know.  These names go along with what Wallace, Ash, and Bailey have named the characters in their heads.  Readers experience the story through the eyes, ears, and brains of one of the principled characters.

AH:  I do not think there is much physical torture, but more emotional torture.  I am a great believer that once you read the shock the fear is caused by the reader’s imagination.  I think I only suggested the pain, but the reader takes it from there with their mind filling in the gaps.  What makes it terrifying are the psychological aspects, the loss of control and how it takes someone to their darkest places.

EC:  Can you explain this book quote, equality is “used to garner support from people who were too idealistic to recognize the darkness that lay at their heart?”

AH:  Throughout history someone has used others better judgement to their advantage.  Sometimes it is too late before people realize what the others are truly after.  In the next few years once the companies get more sophisticated, and more competent, we will see mass manipulation by the digital mediums. No one ever comes to power saying ‘I want to be evil.’  They try to tap into the aspirational aspects of ourselves.  Smokie comes to power by saying how he believes in equality. These people come along and sell us our dreams. There is this ideological version of ourselves with all these wonderful words that are actually ugly.

AH:  The antagonist in Aftershock, the third book, is the embodiment of pure evil.  Ash will grow as a character and this novel will be her story. Wallace and her relationship will be at the heart of the plot.  I hope people find it entertaining, but also will ask questions about the Internet.

by  Adam Hamdy
4.31  ·   Rating details ·  52 Ratings  ·  15 Reviews
Eight months after confronting Pendulum, John Wallace is losing himself in a dangerous warzone in a misguided attempt at penance for what he has done. But an assassination attempt makes Wallace realise that he has once again been targeted for death. This time, Wallace is prepared and, tracking down his would-be assassin, he discovers a link to his nemesis, Pendulum.

The link is the missing piece of a puzzle that has tormented FBI Agent Christine Ash ever since they confronted Pendulum, but with no Bureau support she has been unable to progress her case. Wallace’s proof breaks it, but also exposes them both to terrible danger.

Confronted by a powerful, hidden enemy, Ash and Wallace must overcome impossible odds if they are to avert a dangerous challenge to the networked world that threatens to destroy our way of life. 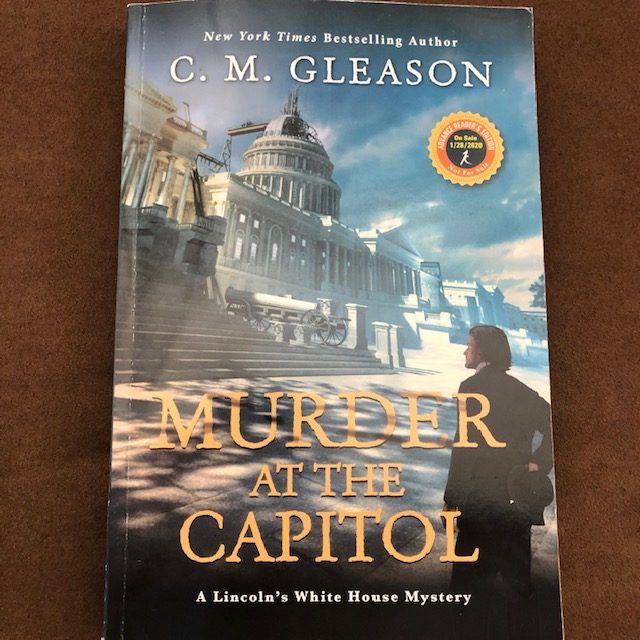 Welcome to my Sassy Sunday Spotlight! Today I am featuring historical, mystery author C. M. Gleason, and his latest book Murder At The Capitol! &#160; Murder At The Capitol by C. M. Gleason is a unique historical mystery.  With a superb ability to combine famous and admired historical figures with characters of her own, Gleason [&#8230;]
00
Pinned onto
Promote Your Books and Reading Recommendations Group!
%d bloggers like this: