​Hush is a compilation of stories by best-selling crime authors. The premise for each story delves into what is truth and how can someone by trusted. The authors are Ruth Ware, Lisa Unger, Laura Lippman, Alison Gaylin, Jeffery Deaver, and Oyinkan Braithwaite.

Check it out over on Amazon!

(Affiliate link at no cost to you).

Snowflakes by Ruth Ware delves into family trust. Her character, Leah, has spent her formative years isolated on a remote island with her family. But their quiet existence, far from the devastated mainland, is cracking. Her father, sensing a coming threat, demands that a wall be built. As the stone blockade rises, the father’s paranoia escalates and so does Leah’s dread that the violence the family left behind has found its way to their sanctuary.

Let Her Be by Lisa Unger begins with an aspiring novelist regretting his stalker instincts. He can’t stop parsing his ex-girlfriend’s popular social media accounts for clues that her ideal new rural life with the perfect man has a dark side. After all, nobody he knows has actually seen the blissful blogger in the flesh for nearly a year. When Will draws a wary friend into his “investigation,” the real question becomes who’s truly in danger. 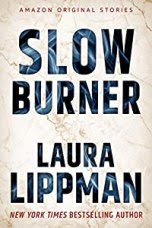 Slow Burner by Laura Lippman has a woman watching her marriage implode over text messages and decides that ignorance is not bliss. Her character, Liz Kelsey promised herself she’d never again spy on her feckless husband, Phil. But then she discovers a string of suggestive texts on his secret burner phone. Even worse, he’s flirting with the woman who shook their unstable marriage once before. But knowledge is power. What’s more dangerous; what Liz knows or what Phil doesn’t know? 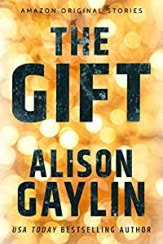 The Gift by Alison Gaylin has a story that is every mother’s nightmare, the disappearance of a child. Actress Lyla McCord and her husband, Nolan received the news that their eight-year-old daughter has vanished. To find her, Nolan reaches out to a psychic gifted with uncanny visions about the lost girl. But Lyla thinks she sees right through him. Is he a con artist or the real thing? Either way, he might be telling the truth. And that’s too frightening for Lyla to bear. 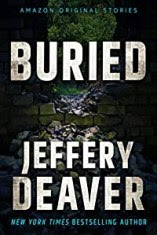 Buried by Jeffery Deaver will keep readers up at night.  Per his usual, he has many twists in the story. After a long run as a respected journalist, Edward “Fitz” Fitzhugh is on his way out when he stumbles across the story of a lifetime. The Gravedigger is a serial kidnapper who taunts the police with riddles. The other puzzle is his motive, which Fitz is determined to piece together. When an eyewitness to the latest abduction leads Fitz closer to the facts, he realizes that the last great story of his career is not at all what it appears to be. 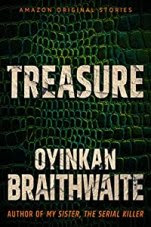 Treasure by Oyinkan Braithwaite delves into class divide. The main character Treasure is a wannabe Instagram influencer in Lagos, Nigeria. She shows off a luxurious life in a gated community that her almost five thousand followers can only dream of. The macho mechanic is Treasure’s number one fan, and double taps and blushing emojis are no longer enough. He needs to meet her in the flesh. If only Treasure were more prepared for destiny.

These stories feature conspirators, psychics, deceptive lovers, and desperate killers. The collection of six stories ranges from political mysteries to psychological thrillers, in which deception can be a matter of life and death.

Below is a Q A with all six authors:

Oyinkan Braithwaite: I was excited to be a participant. The premise covered what I am interested in writing.  The theme of my story included some things I wanted to play around with.  For me, short stories are easier to write.  They allow me to be a bit more creative, and I do not have to worry about keeping up the momentum.

Jeffery Deaver: When I write a novel or a short story the emotional payoff needs to be just as high.  With a short story there is no time to develop the character.  They must jump off the page.  Every twist must be earned.  Throughout the chapters there must be “buried” clues.  In a sense a misdirection.

Lisa Unger: I do enjoy writing short stories; although I express myself best with novels.  I like writing the long relationships of the characters.  Everything starts with the character’s voice and I then find my way to the story.  In this story it started with Will’s voice.

Elise Cooper:  How did you get the idea for this story?

Ruth Ware: I thought about the nature of truth and lies.  How do we deceive ourselves and allow ourselves to be deceived?  Now people are obsessed with fake news. What would happen if the most significant people in your life lied to you?  For me a significant influence was Educated by Tara Westover.

Lisa Unger: The original name for the compilation was The End of Truth.  For me, this was basically catnip, since that is the theme that runs through all my books. What is real and what is not?  How is perception altered by addiction, sleep deprivation, or insanity.? This is what I live for. In this story, my character, Will, has a problem with anger and jealousy and has been stunted by his childhood trauma.  He has made the relationship toxic because of his problems.

Laura Lippman: I am interested in tech and spying.  What happens to people who eavesdrop?  Are they curious about what is being said behind their backs? In a bad marriage, who is to blame? People grow in different directions and sometimes grow apart.  There is power in balance and their dynamics.  In this story, the wife feels she has been left behind.

Alison Gaylin: I wanted to write about psychic situations, a missing child, and a Hollywood couple.  I hoped I showed how a missing child is a great equalizer.  It doesn’t matter what wealth or social status someone has if the person cared about it gone.

Jeffery Deaver: In this story it was about deception.  The character manipulated the media.  I thought about a Gravedigger because it makes for a good headline.  Ever since I graduated from the University of Missouri with a journalism degree I have been fascinated about truth in journalism.  Can fake news ever be weaponized?

Oyinkan Braithwaite: I like to explore the role of social media.  I am fascinated by it.  What are the influences that create a whole false life to get money or popularity?

Elise Cooper:  There were interesting tidbits in some of the stories?

Jeffery Deaver: I have been putting grammar teachings in all my books since the beginning. My main character in my novels, Lincoln Rhymes, is a grammar totalitarian. If someone messes up in front of him, he will correct them, no matter who it is.  In a book, dialogue might have grammatical errors, but the descriptive writings by the author should not or they will be called out.  This story dealt with the apostrophe plurals and the articles, “the and a.”

Laura Lippman: I love Greek mythology.  This story had a love triangle and how natural it is to be angry at the third person.  But is it misplaced anger?  The Greek Gods, Zeus and Hera, and their relationship have always bothered me.  He is never punished for his infidelities. Why does Hera punish the other woman?  It is because she cannot punish Zeus. Immortality of the Gods is an interesting mirror to the idea of ‘until death do us part,’ because he can never die. They cannot be parted and end their marriage.

Lisa Unger: I wanted to explore the world of social media.  I did it through this quote, “This is my point. The world. The real world is fraught with imperfections. It’s messy and complicated, often uncomfortable, awkward, painful, dull. It’s not curated and filtered for consumption. “But that’s social media.” “It’s not … true.”

Ruth Ware: I deliberately left the setting understated.  English readers will probably think it takes place in America because of the reference to guns.  I suspect American readers will think it takes place close to the UK, because of my British voice.  From a plausibility point of view, it could maybe happen in Canada.  It would be easier for someone to hide because of the territory, coast line, and fewer population. I hope readers felt slightly foreign no matter where they live.

Elise Cooper:  Can you give a shout out about your next book?

Oyinkan Braithwaite: It is a novella titled The Baby Is Mine.  I set in during the lockdown period.  The plot has a man finding himself in a situation where he has to discover who is the mother of a particular baby.

Jeffery Deaver: There will be a short story that leads into the novel plot where Lincoln Rhyme has to figure out who is trying to kill him.  It comes out a month before the novel.

Alison Gaylin: Out late spring is The Collective.  It is about people whose children are missing, but has nothing to do with this short story.  The plot has a woman who never got over the death of her young child.  She discovers on the dark web, a group of mothers who were in a similar situation. They are killing those responsible for their children’s death.

Laura Lippman: It is titled Dream Girl about a mystery in a high rise.  I started writing it over a year before the virus.  The main character questions their sanity.  They are thinking, either I am losing my mind or someone wants me to think I am losing my mind.

Lisa Unger: It is titled Confessions on the 7:45 and comes out October 6th. It is based loosely on Strangers on A Train. There is this chance encounter where two women sitting next to each other on a commuter train start conversing after the train has stalled.  This young woman confesses her dark secrets. They end up seeing each other again.

Ruth Ware:  Out in September will be One By One. It is set in the French Alps.  During a corporate retreat one of the founders goes missing.  Soon after there is an avalanche, which traps the group from getting out.  People are getting killed one bye, hence the title.